By Ttrees - 05 Dec 2019, 22:26
- 05 Dec 2019, 22:26 #1323635
Make sure you make some sort of rough infill before peining those dovetails as the material is softer, thinner and the fact you have made cupids bows doesn't make it easier.
It might even be advisable to have a length of stock for when or if a section gets damaged.
Good luck with the build
Tom

That's the idea any way

By gasman - 06 Dec 2019, 19:28
- 06 Dec 2019, 19:28 #1323819
WOW you just upped the bar with those cupids dovetails in steel / brass! I am in awe if that turns out as beautiful as the 'female' component of it looks. I wish you all the best...however one thing which I would be concerned about is that brass is surely more malleable than steel? I might have to google that. But the way you have done it it surely means you have to 'persuade' the steel to fill the holes in the brass sides? My moderately scientific, moderately experienced in planemaking, brain, is immediately concerned about how that will turn out. For me this is the most interesting thread I have followed for a good while and I wish you all the very best.

This was exactly my concern too.

I'm quickly learning nothing about this project is easy!

Now the Cupid bows are cut I can start to shape the plane sides.

I used double sided tape to fix the two halves together then stuck my paper template onto that.

I then cut the shape out on the band saw 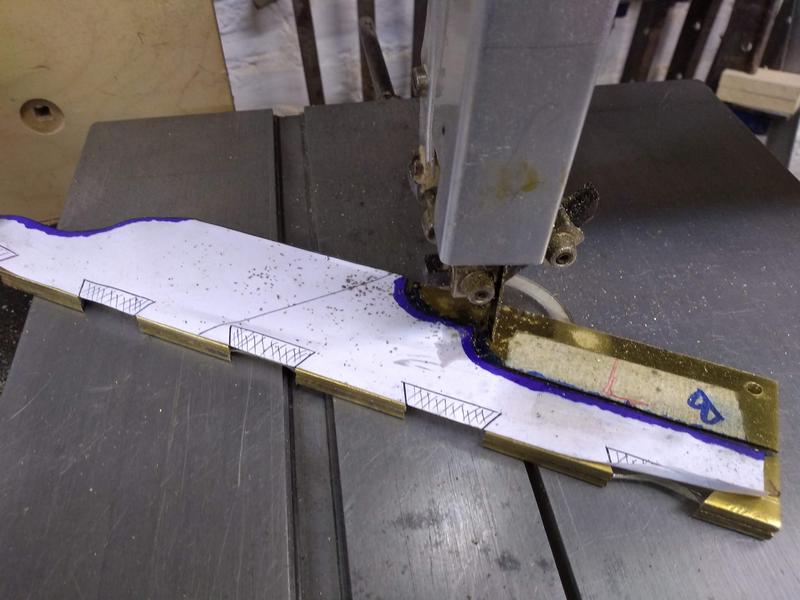 I then went over the shape with files to clean it up. I won't bother getting it exactly right at this point as I'll be sanding it later once the wooden infill is made and fitted. 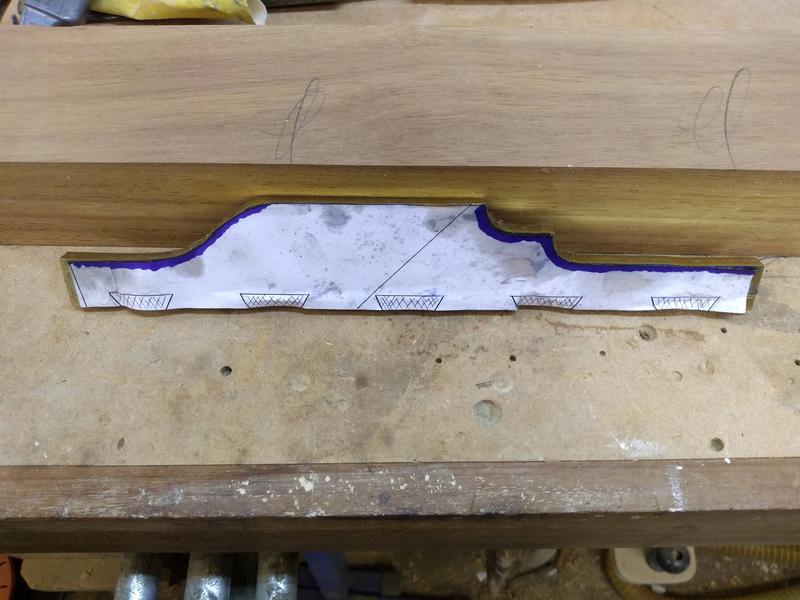 Finally the plane is taking on some sort of shape! 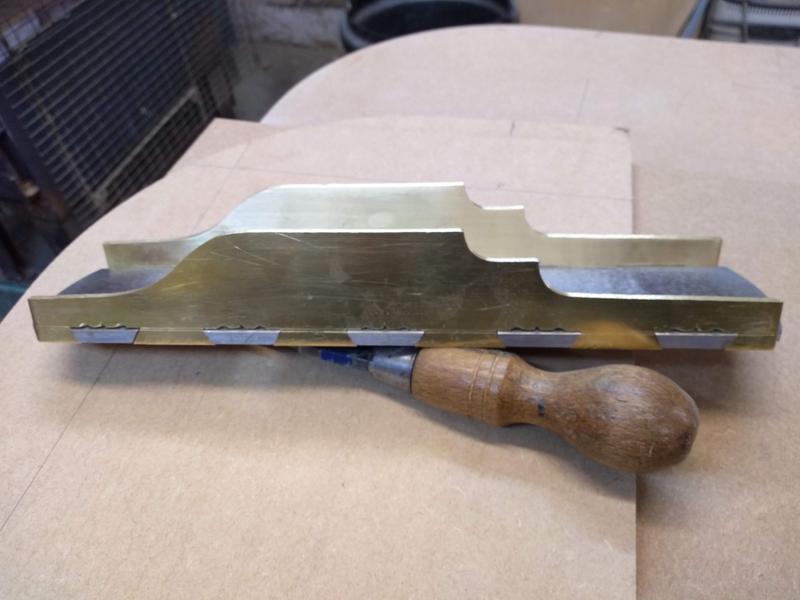 That's all for this evening as time got away from me.

Next up is the part I'm most dreading, peining.

Are you going to make a bridge?

The former is nothing elaborate just a lump of Iroko machined square.
I'm going for a lever cap design but with a single iron instead of a bridge and wedge.

Now that the plane sides have been cut to shape I can permanently fix them to the sole.

This is done by peining the metal surfaces together to create a tight fit that will not come apart.

I started by machining a piece of wood to the exact internal dimension of the sole. I made sure it was straight and square as this will help to hold the sides of the plane square when i peen them.
I fixed the piece of wood inside of the plane body and secured it in place with G cramps and screws. 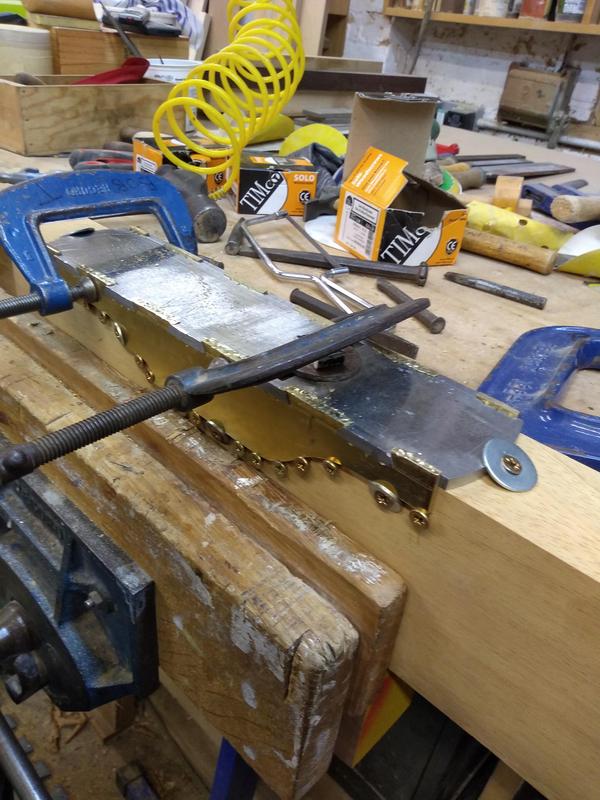 It's make or break time, this is either going to go well or totally ruin all of the work so far leaving me with no choice but to scrap what I've done and start again.

I needed to peen the side dovetails first as this will drive the sole of the plane tight onto the sides.

I secured the plane into my bench vice and fixed a G-cramp around the dovetail I was working on. This was to help keep the metal from spreading outwards.
I then used a combination of metal punches to try and drive the metal into the cupid bows.

I found that working from the outer edge towards the centre helped to get the brass where it needed to go. 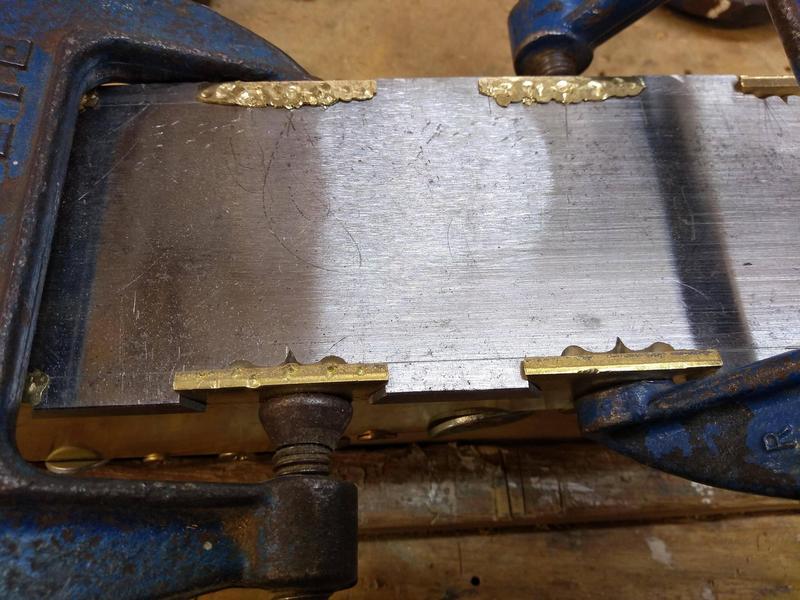 Filling the bow part was hard enough but trying to drive the brass all the way to the point of the cupid bow was incredibly difficult.

I found the hammering force needed was far greater than I had imagined and I was getting a lot of bounce from my bench vice making it even harder work.
I tried hammering on top of an anvil but found the plane would bounce even worse. At least with it held in a vice it left both hands free to work.

Here you can see that the bows are filled but I still need to drive the brass in to the point. 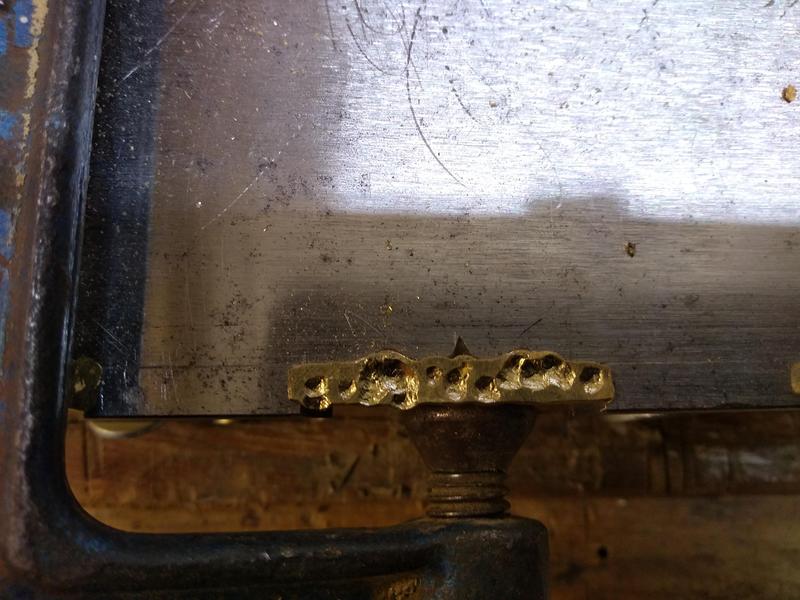 I also found that while brass is quite soft it's also brittle. On a few occasions small pieces would crack and break off as can be seen on the right of the first dovetail. 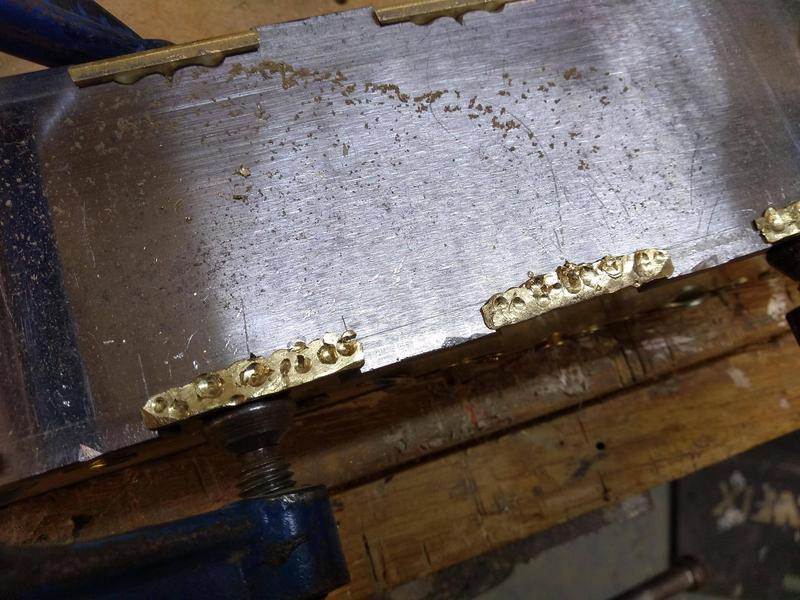 I knew this stage was going to be tough but it was much more difficult than I had anticipated. The bounce from my vice was hindering progress and my poor technique certainly wasn't helping either.
But I persevered, wedging a large bit of wood under my vice as a leg helped to take some of the bounce away and with each dovetail my technique was improving until they where all done. 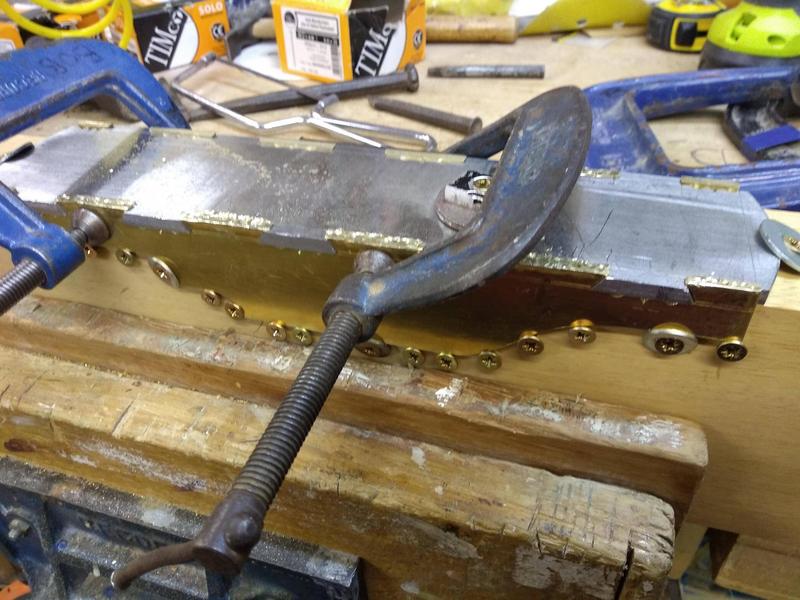 All I had to do now was peen the steel dovetails on the side of the plane.

I thought I'd have no chance of getting it done, brass is softer than steel and that's been a nightmare but to my surprise the steel seemed easier to peen than the brass.
I used the same technique of clamping the plane in the vice and working from the outside in to drive the dovetail up tight.

With all of the peining done it was time to file away the surplus metal and flatten the sides to reveal the results.
I used a mixture of files to remove the bulk of the waste then fixed 60 grit sand paper to the bed of an over hand planer,
It has a solid cast iron bed which is very sturdy and nice and flat. I used that to flatten the sides and sole.

thankfully the side dovetails where looking good 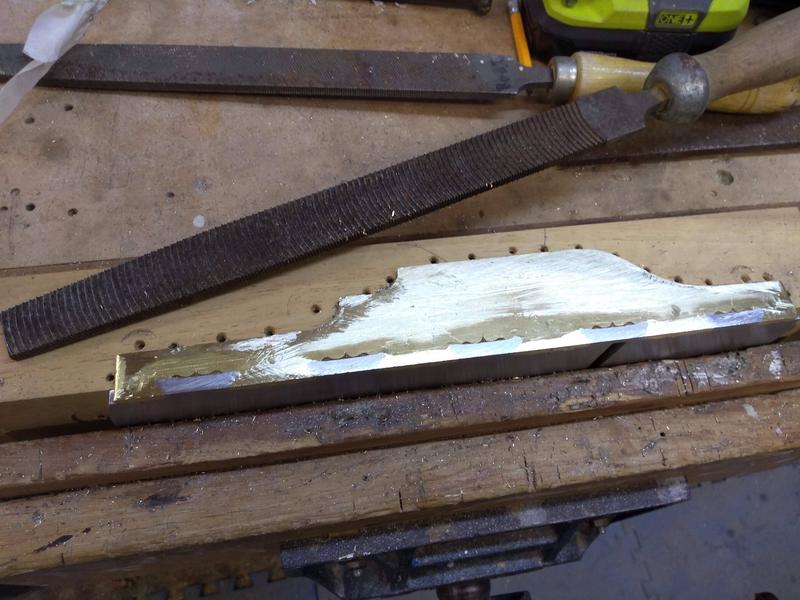 And after a lot of filing and sanding the sole dovetails could be seen. 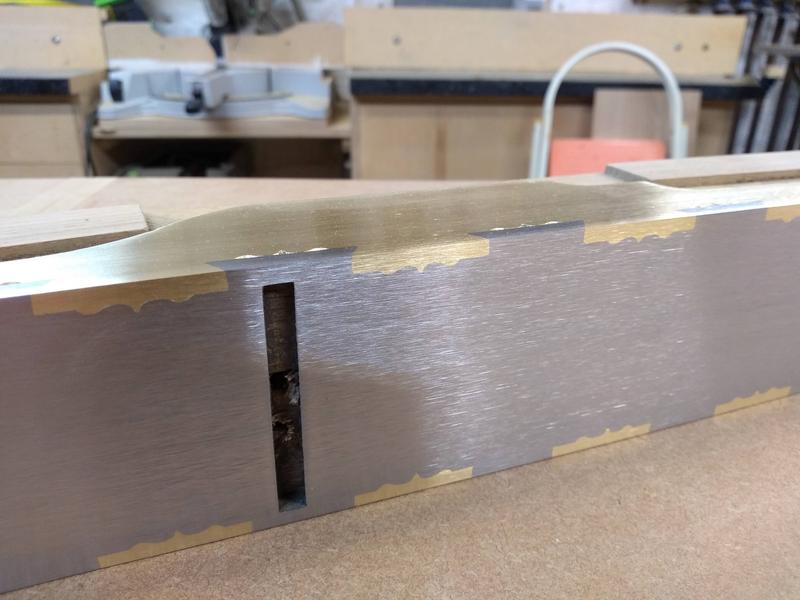 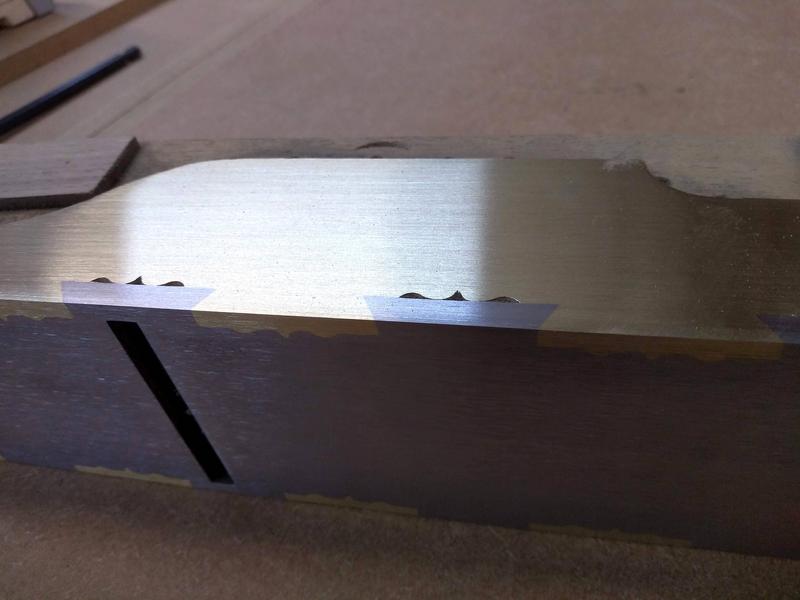 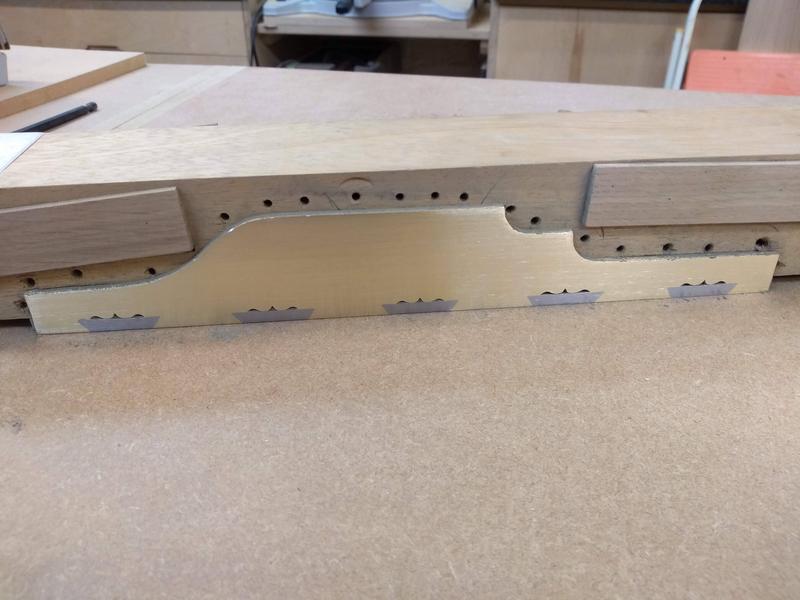 In total with filing and sanding this stage alone took around 5 hours and while they are not perfect I'm pretty happy with the results for my first attempt.
There are some gaps that I'm not happy with but the majority of them came up well.

The project still has a long way to go but I've learnt so much already from it. It's been hard work but rewarding too. I was most apprehensive of this stage and I'm glad its done, I don't think my arms could have taken much more hammering

From a tiny bit of experience working on brass some years ago, I think the problem is that although it starts out soft, it very quickly work hardens and becomes brittle. On some work you can heat it up with a torch to regain malleability, but I suspect on a plane like yours, doing so would just introduce a set of new problems with the steel and brass expanding at different rates.
Andy

Work hardening is a phrase I've not heard of before and from a quick google search it seems that is exactly what was happening.
Interesting to know heating the brass can help to soften it again I'll have to remember that.
It might have even been worth gently heating the brass before peining each dovetail.

Chris, I'm leaving the side cupid bows exposed (unfilled) I had decided to do this from the beginning as mentioned earlier I wasn't sure if the softer brass would deform when trying to peen the steel into it.
In the future I'd like to have another go at making another plane and filling all of the cupid bows but I think I'd want to use bronze for the sides as I understand its much harder than brass and should hold up to the peining process a lot better.

Finally with the sides and sole secured I can move onto the wooden in fill.

As I understand Box wood, Rosewood and Ebony where popular choices for metal infill planes.
Unfortunately these woods are hard to come by now and if you do find a piece there is a high price tag to go along with it.
Wooden moulding planes where normally made from Oak, Beech and Ash.
Many different woods have been used for plane making but these where the most popular.

The main criteria for the infill is that its strong, Tight grained straight timber that's been seasoned well.

We have a nice variety of woods at work but one of my favourites is Hard Maple.
Beautifully white in colour with dark cathedrals. Its very tight grained and strong, just right for an infill.
I was even luckier that we had a piece with some "birds eye" in which is stunning when polished.

Only down side is it wasn't thick enough so I had to glue two bits together. 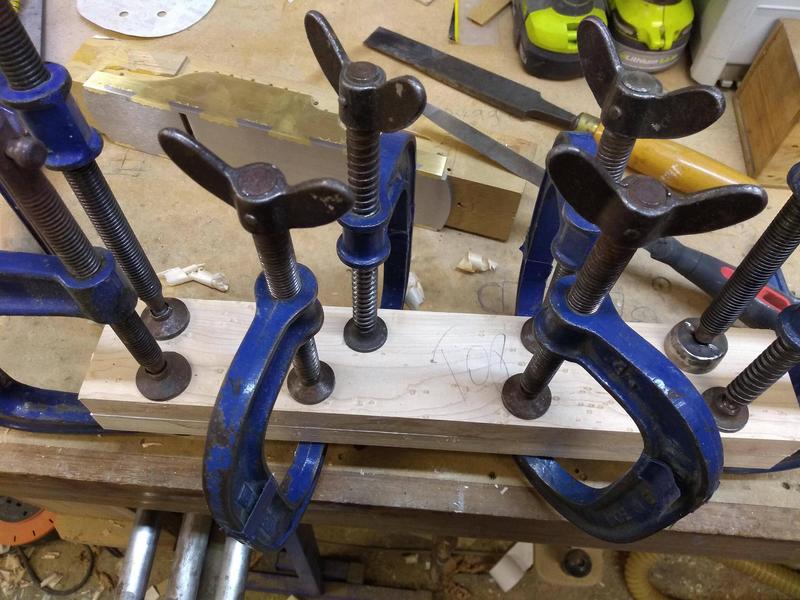 Here you can see some of the "birds eye" figuring in the grain. 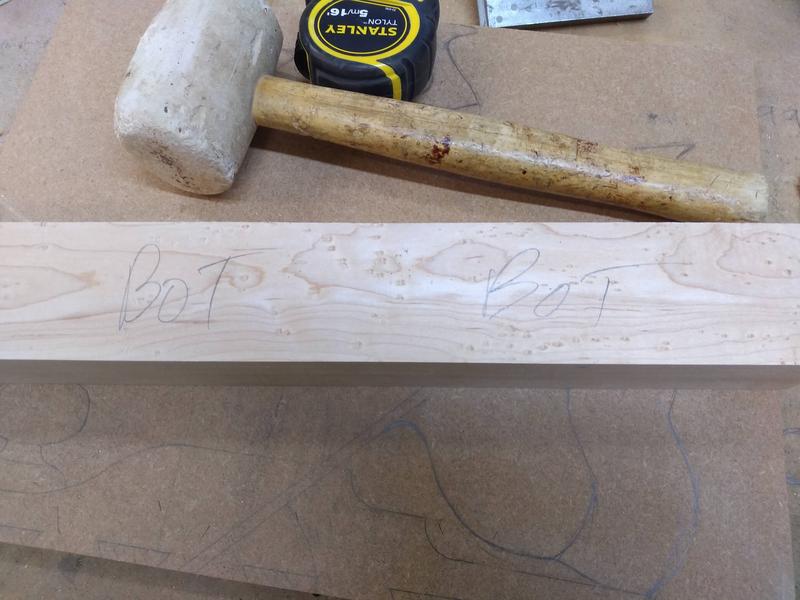 Once the glue had set I planed the Maple so it was a tight fit into the plane body.

Then cut away the excess on the band saw. Hard Maple living up to its name is tough to cut even with a band saw. Though the blade was a bit dull after cutting all the brass. 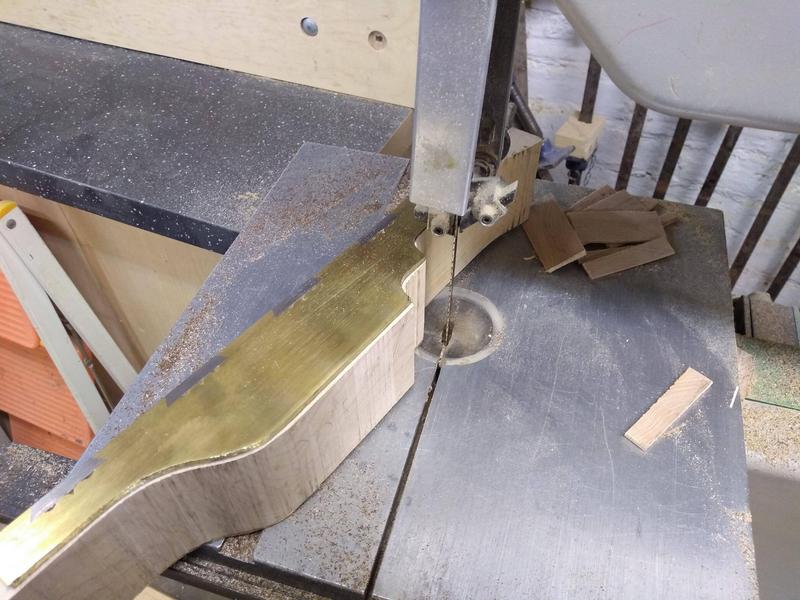 With the waste taken away I made a simple jig to hold the plane and infill so I could machine it. 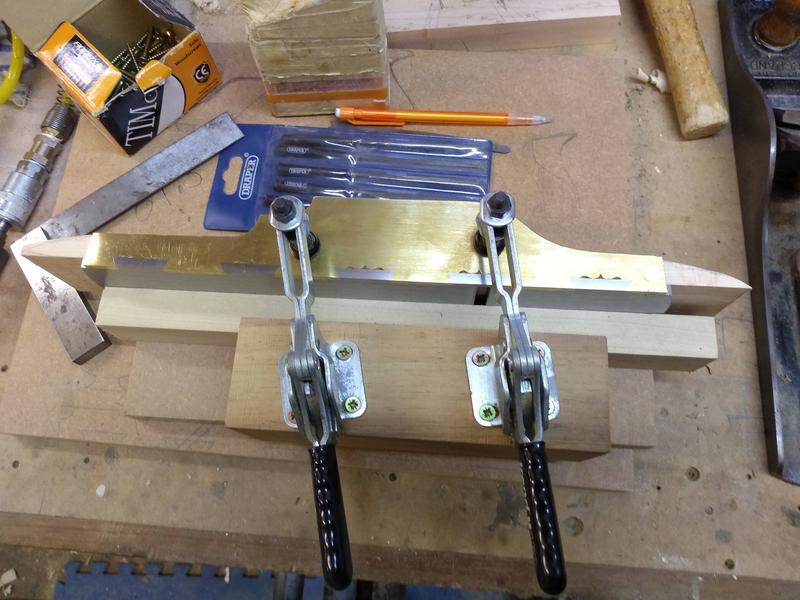 On the over head router I used a twin flute bearing cutting to trim the Maple down flush with the brass sides.
I had to take a cut from each side as the cutter wasn't long enough to do it in one pass. 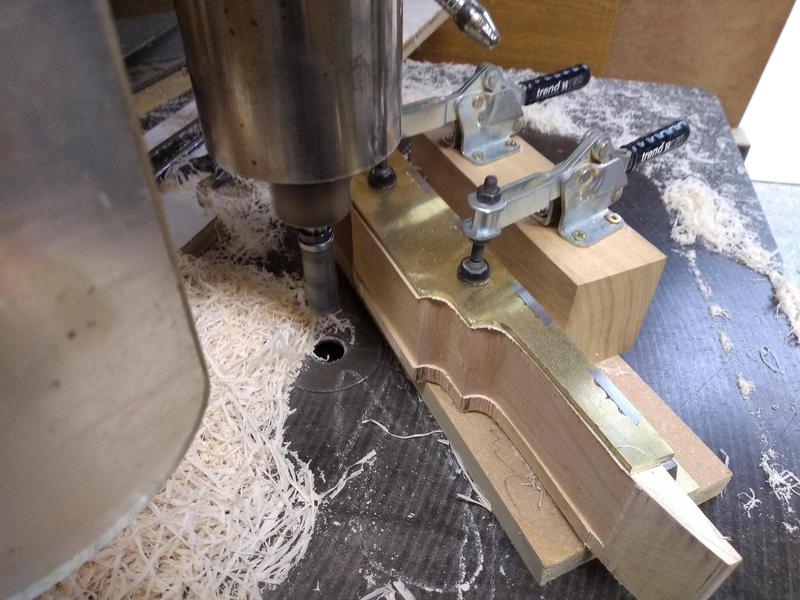 Maple machines beautifully and I was left with a clean, crisp cut.

I was unsure how I wanted to finish the ends of the plane but in the end settled with a round which I again cut on the band saw. 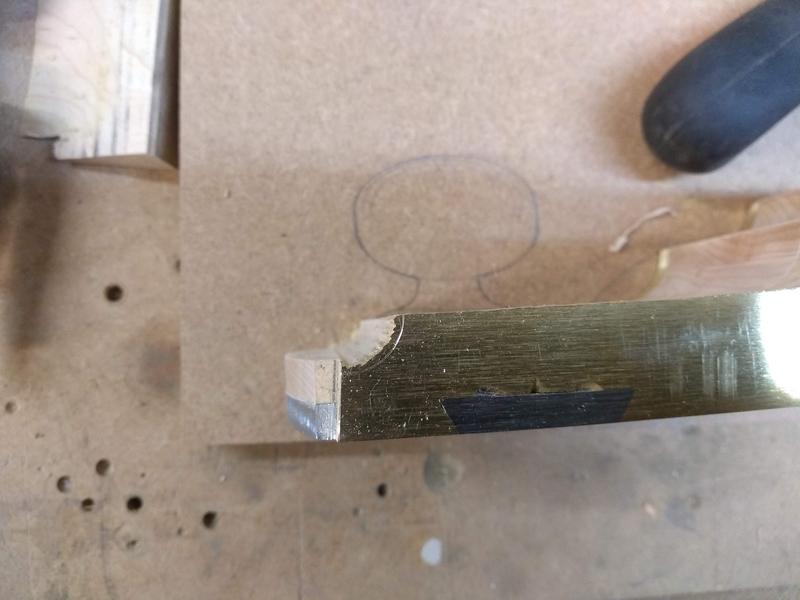 After some more filing and sanding the profile is complete. Hurrah! 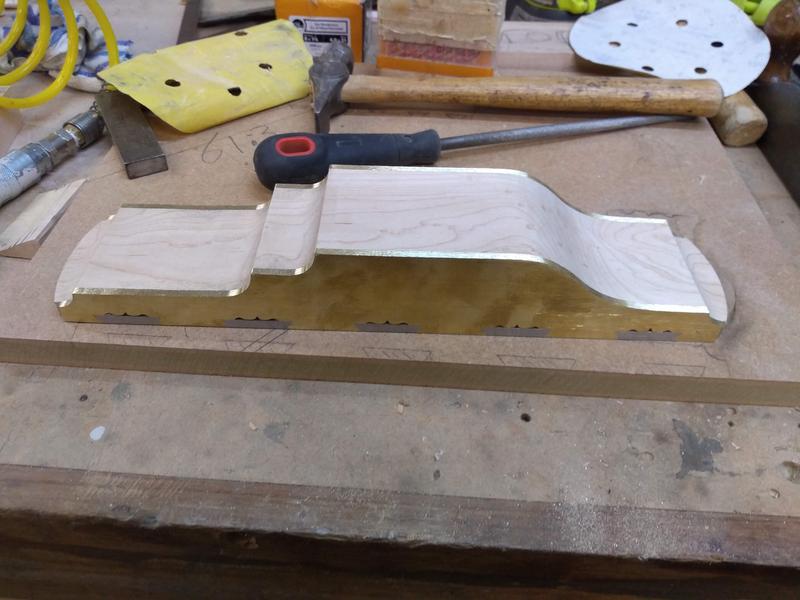 Great work and a real pleasure to read about and see your progress.
'Half an inch of water and you think you're gonna drown.'
J Prine.