So, do most of you use sketch up for your designs?

I started carrying little Molleskine notebooks way back when I was working in leather, because my best ideas and solutions usually occur when I'm out and about, at work or otherwise away from my home PC. It's also far quicker to make quick sketches, make alterations or additions, and refine them into nice pretty 3D pencilled artwork later on... if they're even needed.

By Fergal - 04 Apr 2018, 15:43
- 04 Apr 2018, 15:43 #1217381
I find Sketchup handy for visualising how something will look in its final location and getting proportions right. For example I once used it to design some under-stairs cupboards so that I could see if the doors would open without fouling anything.

I also used it to layout an ensuite shower room in a loft conversion. By putting a model of a person in the room, I could see if there was enough headroom allowing for the slope of the ceiling.

When designing small items, it is useful to be able to print them out actual size as templates etc.

I've recently been trying Fusion 360 which is considerably more powerful and consequently much harder to learn. Its main advantage is that it is parametric so that you could, for example, design a shelving unit of a certain height with an arbitrary number of shelves which would be equally spaced. By changing the number of shelves required, the program would automatically recalculate everything for you.

By Beau - 05 Apr 2018, 15:39
- 05 Apr 2018, 15:39 #1217540
I use whatever I feel is needed for the job. Sometimes a sketch on and old envelope and do the rest in your head. SU is nice for complicated joints and seeing in 3D how something is going together. Also I am poor at drawing for the customer and SU works well for this but if I could draw well would not use it for this. Favourite when possible is a rod which is a full size plans on a sheet of ply.

Fergal wrote:
I've recently been trying Fusion 360 which is considerably more powerful and consequently much harder to learn. Its main advantage is that it is parametric so that you could, for example, design a shelving unit of a certain height with an arbitrary number of shelves which would be equally spaced. By changing the number of shelves required, the program would automatically recalculate everything for you.

Sketchup can do this.

Fergal wrote:
I've recently been trying Fusion 360 which is considerably more powerful and consequently much harder to learn. Its main advantage is that it is parametric so that you could, for example, design a shelving unit of a certain height with an arbitrary number of shelves which would be equally spaced. By changing the number of shelves required, the program would automatically recalculate everything for you.

Sketchup can do this.

By Grawschbags - 05 Apr 2018, 21:26
- 05 Apr 2018, 21:26 #1217600
I have been teaching myself sketchup whilst designing a router table. I roughed it out with pen and paper, then took it to sketchup. It's probably already saved me the cost of some materials given that I could see issues in my design before cutting anything...
Eric The Viking likes this

From the Autodesk website, Fusion 360 is free to hobbyists and startup businesses that have less than $100K in gross revenue. The free subscription must be renewed each year for as long as Autodesk supports the generous offer.

Grawschbags wrote:I have been teaching myself sketchup whilst designing a router table. I roughed it out with pen and paper, then took it to sketchup. It's probably already saved me the cost of some materials given that I could see issues in my design before cutting anything...

Exactly the same for me - SketchUp lets me test designs before diving in, saving both mistakes and materials.

For example, I had a shock recently when I realised that for the interior doors I'm planning to make, I can save about seven feet of stock by using dominoes instead of traditional mortice and tenon joints. That's per door, and I have a dozen of them to make. It means the dominoes will pay for themselves and the construction will be much simpler as a consequence. Of course, if I was more experienced I'd know this already (and I'd already have a story stick, too), but I'm not. Seeing it as 3D objects really helped in construction decisions.

Of course I rough stuff out with pencil and paper (weapon of choice is a 3B or 4B pencil), but my measurements come from SU, as do the plans usually, and I can quickly get sections through a 3D object, to see if there are issues such as clearances that will cause problems.

I've got to make a strong storage box for castoring legs for a tower scaffold system. These things are three feet long (roughly), very unbalanced (weight at one end), tubular and greasy. But they are also fragile and a safety-critical component. And I need space to store small parts for the toeboard brackets, etc. I won't be using it - it belongs to the church my wife attends - so things have to pack-in intuitively. So I've drawn out a castor column to scale, and copied it four times. These objects I can just move around in 3D until I get a practical arrangement.

I'm refurbishing a motorbike fuel tank, by stripping paint and rust from the inside and re-coating it. It's big and will be pretty heavy when it's full of chemicals. I'm making a jig to hold it, allowing it to rotate for agitation and invert for draining out. I can't afford to drop it (no dents presently) nor splash chemicals on the outer paint finish. So again, modelling it and the jig lets me see if ideas will work.

I've also played with drill press table designs, etc. Again, I picked up on problems where the quill three-handled drive would foul parts of the table, and issues fixing it to the press's existing circular table, for which I think I now have a neat solution.

I could do all of this without SU, but nowadays it's my go-to aid for thinking through design problems.

The biggest tip I was given, incidentally, is to make every object you create a "component", as soon as you draw it out - cubes, cylinders, whatever. That way you can control how they interact with other parts of the model (you can always combine them later on). The ability to have clones of a component, such that changing one modifies all of them at the same time, is invaluable for things like table legs and other repeated components in a design. I use that a great deal too - it's automatic and very fast. Again you can turn this off quickly if you need to.

HTH, E.
"When I was younger I could remember anything, whether it happened, or not." Mark Twain

DTR wrote:A sketch on the back of an envelope works for me.

On occasion I've done a scale drawing, usually when there's funny angles involved. An old roll of wallpaper is quite handy for drawing on; I got a roll for 25p from B&Q (or Homebase?) when they were getting rid of stock.

Generally I agree with this approach as I just can't be faffed with SketchUp. Over the last couple of years I've created several boards on Pinterest of stuff that interests me and it's from this that I get most of my inspiration and ideas for new projects. Any new project is sketched out in a drawing book from Poundland and further details can be drawn approx. to scale on squared paper, available from WHS.

I then make a 1:2 or 1:5 scale drawing(s) on white wallpaper lining paper (cheap as chips but buy the lightest grade) which you can get from any of the DIY sheds - Rob
Woodworking Projects

I used to work part-time for Axminster Tools & Machinery; I no longer do so and have no connection or affiliation with the company in any way.

*Draftsight for the last year or so. It's excellent, it's free, and it took me less than 2 days to teach myself.

The following is the real benefit of drawing on the computer, rather than at a drawing board, in my view. This is a series of sketches of alternative pedestal designs for a dining table I am planning for next year. It takes seconds to copy a design across and alter it, so that you have side-by-side comparisons, and can make an informed choice from a dozen or more alternatives: 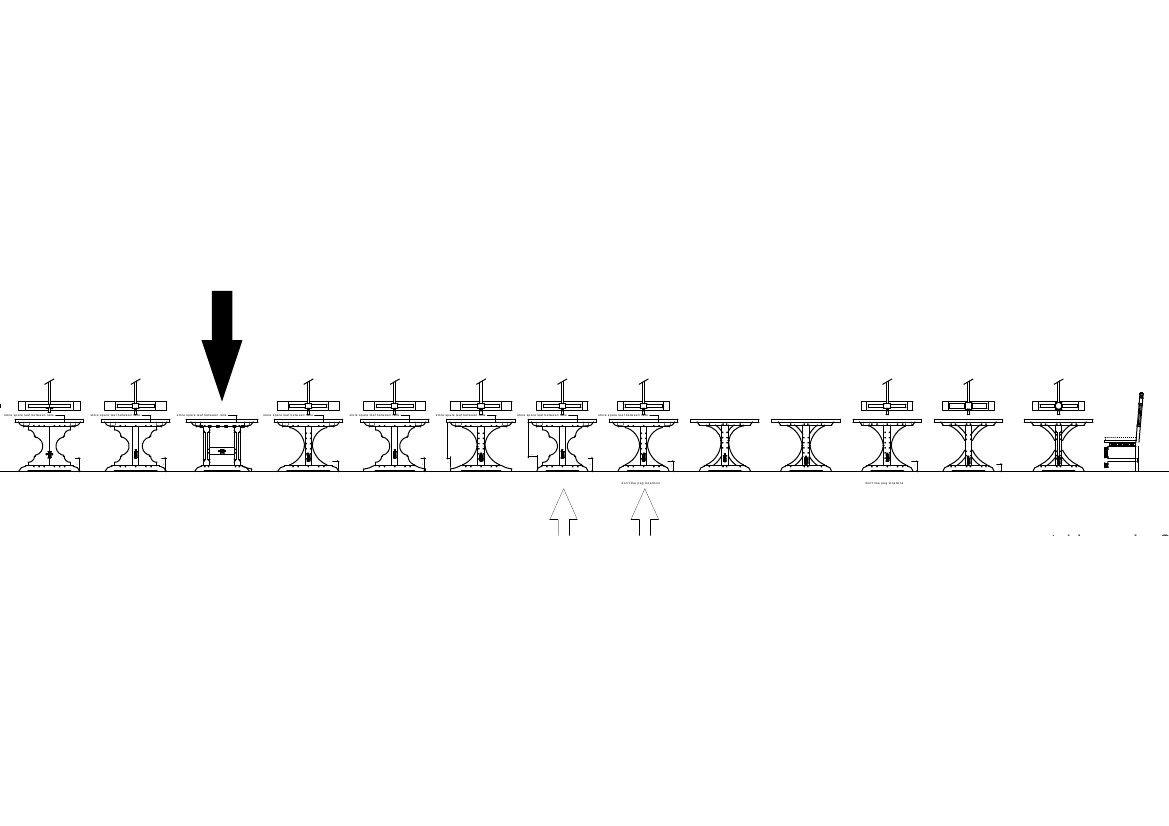