By TFrench - 12 Feb 2020, 21:58
- 12 Feb 2020, 21:58 #1336038
Evening chaps. I just bought this seriously cool vice on eBay - mainly because I've never seen anything like it before. I think it's a machinist/engineers vice. Absolutely beautifully made thing. The rear jaw spins when you depress the latch at the back to give all the different shaped jaws. The brass soft jaw is captive on the lower rod so it just sounds out of the way when not needed. The only marking I can find on it is HALE D 50-1. Done a fair bit of googling and can't find anything about it. Has anyone seen one before? 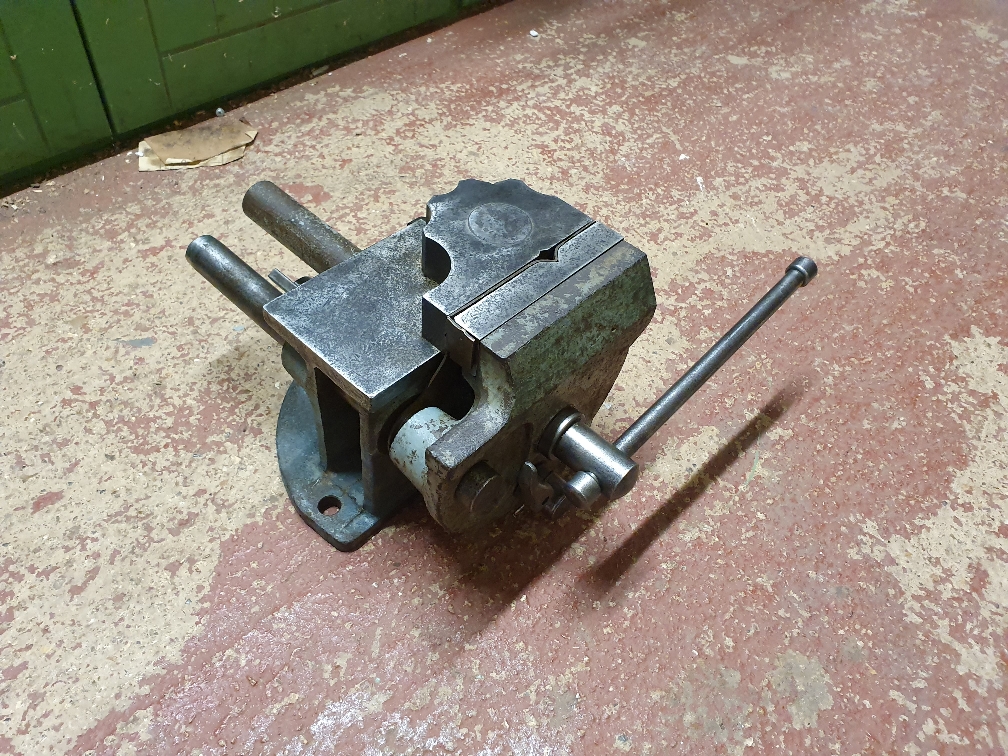 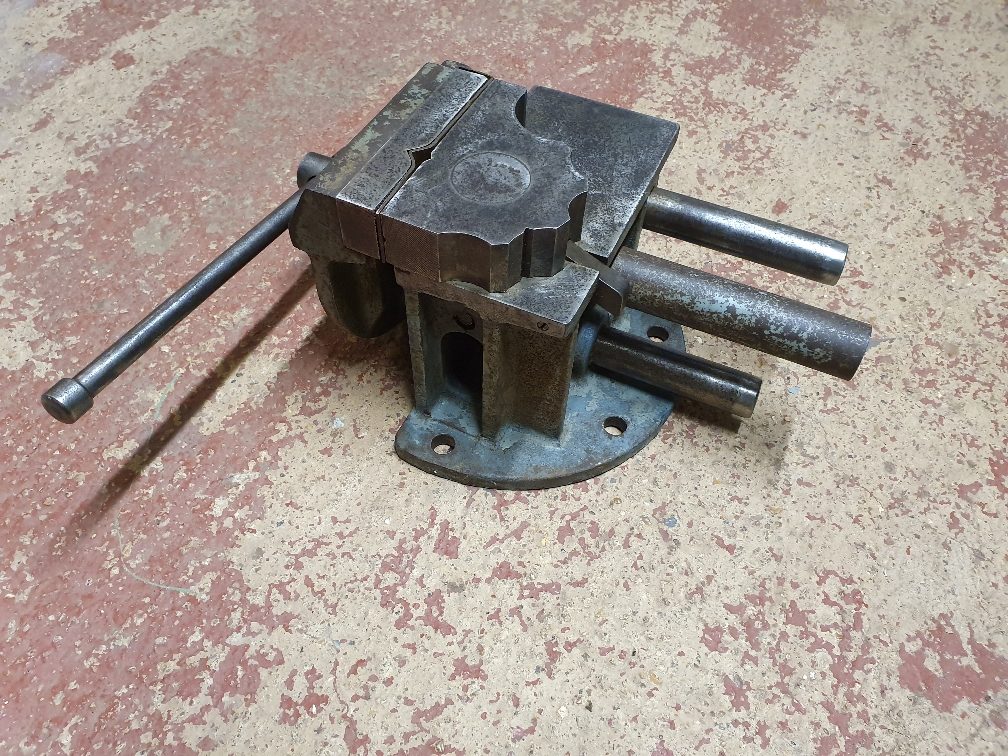 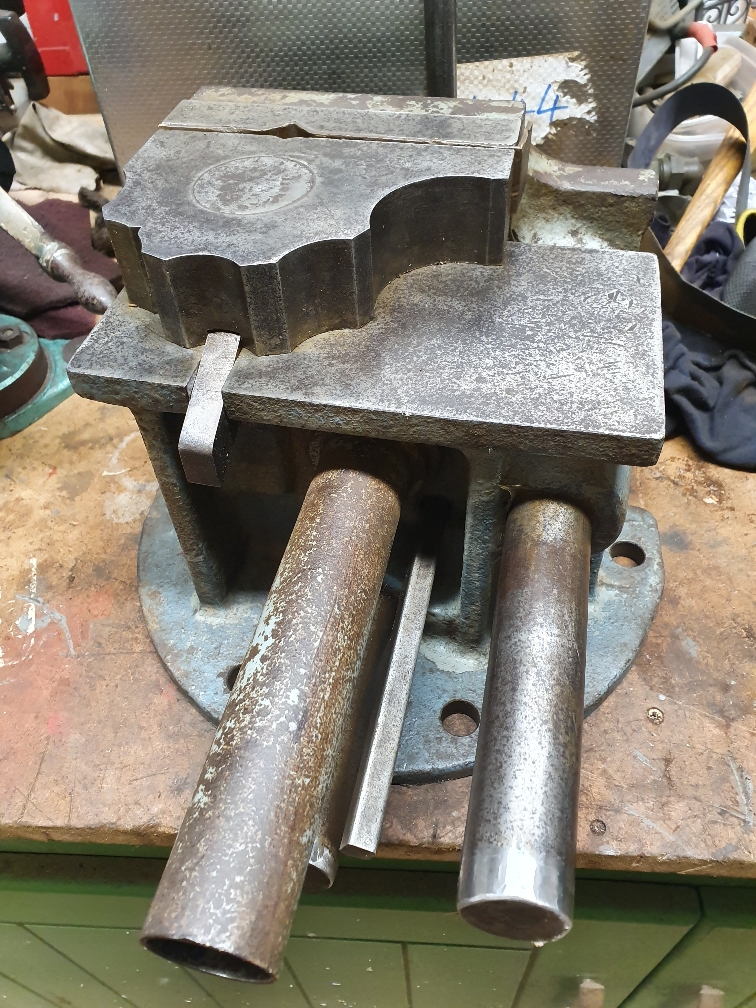 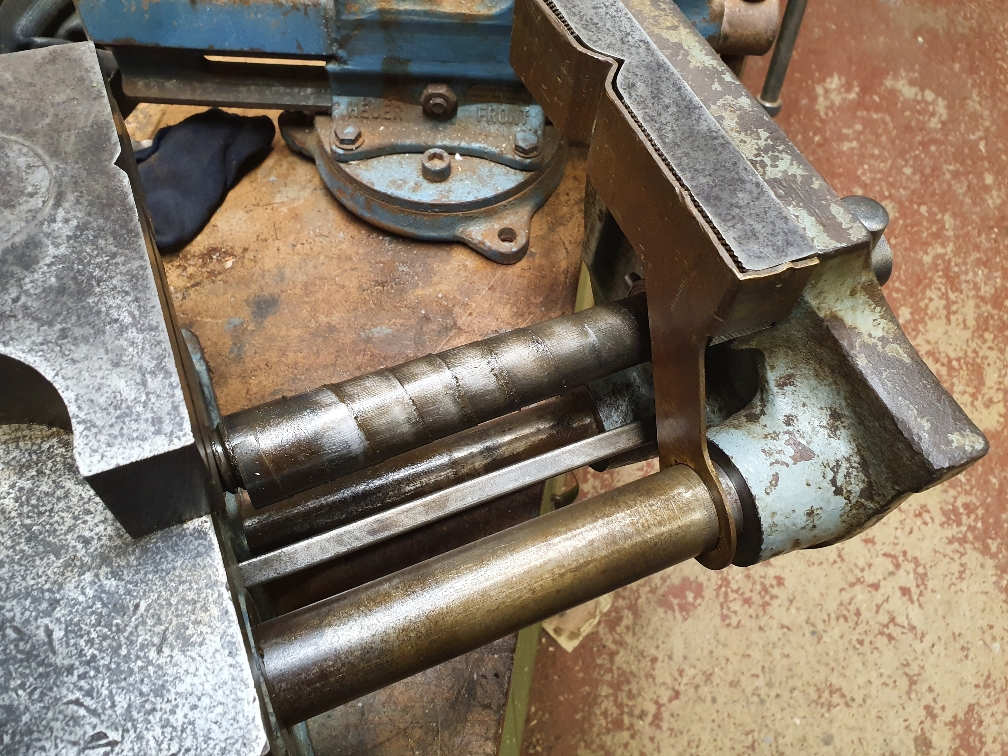 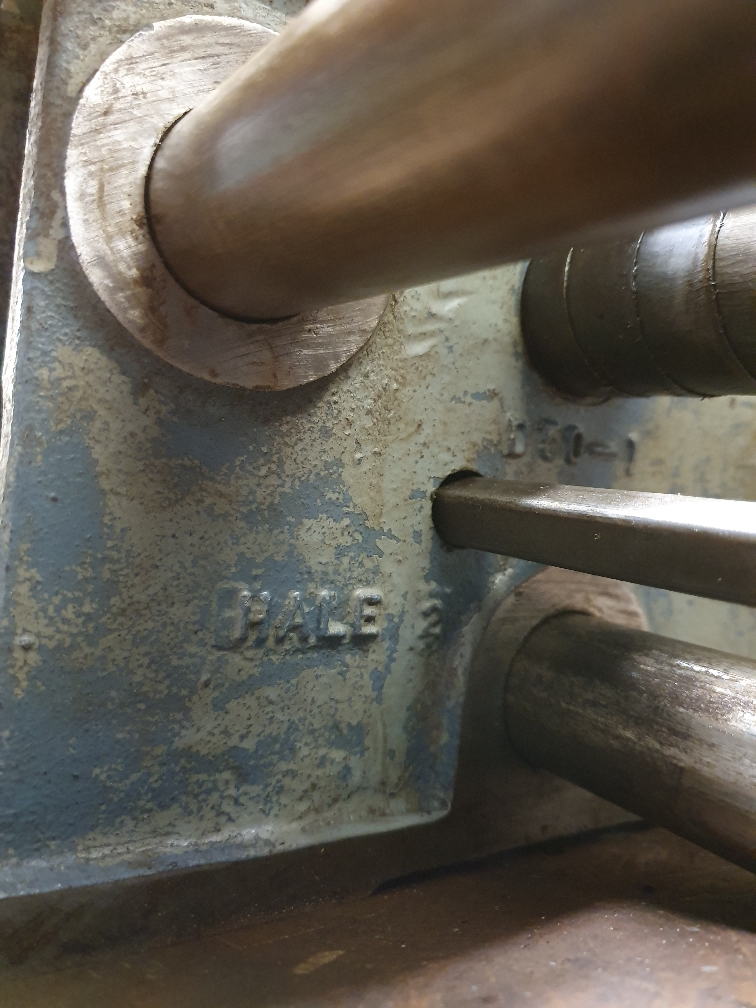 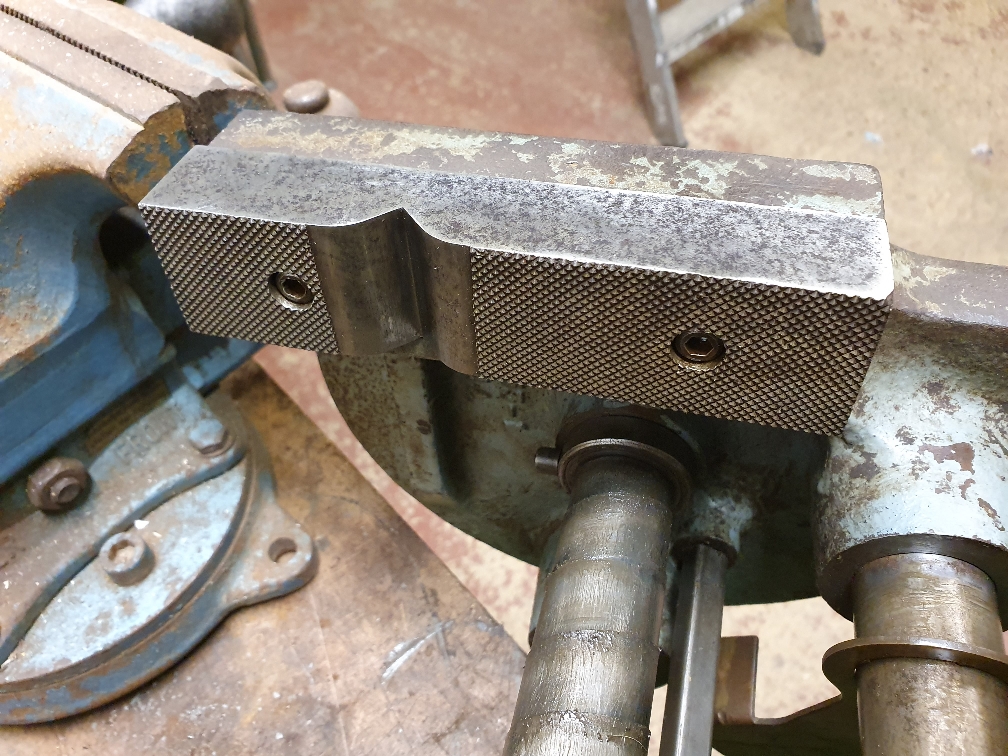 By Orraloon - 13 Feb 2020, 01:25
- 13 Feb 2020, 01:25 #1336066
Its a beauty and in great condition too. Dont know what trade used it but something that needed to hold various shapes. Its condition suggests it was fine precise work too as most old metalwork vices are usually pretty beat up and battered.
Regards
John

By jeremyduncombe - 13 Feb 2020, 09:45
- 13 Feb 2020, 09:45 #1336106
I believe there used to be a company called Hale in the USA which made specialist engineering tools. I can’t find out anything about them and they are probably long gone. There is also still a long-established company called Parker Hale which made a vice for gunsmiths. This is not your vice, but may be worth contacting Parker Hale to see if they can help. I don’t know if they took over the original Hale company many years ago, or if the two were always entirely separate. Whatever it is, it’s a fascinating piece of equipment.

There are some, ah, 'vise aficionados' in the US who would pay an arm and a leg and drive across two states for a vice like this, especially in such stonking condition.
"There is possibly more mystique in finishing than in any of the woodworking skills, and with (arguably) less good reason."
Aidan Walker

Edit 3.. annnnd that's what you get for falling down the rabbit hole on the Internet while waiting for sausages to cook for your kids dinner...
Wadkin did a universal ball and socket vise and now there is a hole in my life where a few moments ago there was not... hope the owner won't mind me sharing the pic. It's from the Mig welding forum above. 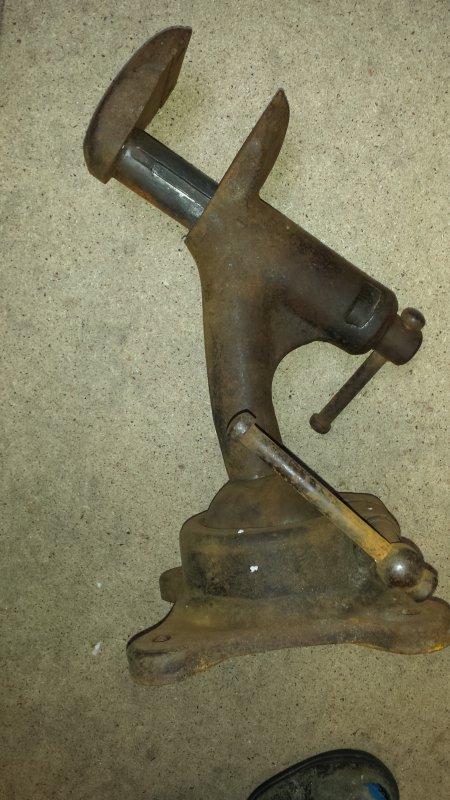 AndyT, TFrench likes this
'Half an inch of water and you think you're gonna drown.'
J. Prine

Wadkin vices everywhere! The precursors to Record!
My tiny mind is blown.
Gotta go.
Sausages are done.
'Half an inch of water and you think you're gonna drown.'
J. Prine

I've had a bit of a look for a patent listing but not found anything in Espacenet.
Andy

By Trevanion - 13 Feb 2020, 19:29
- 13 Feb 2020, 19:29 #1336221
I saw a post on facebook marketplace the other day about a "widow clearout sale" where there was a bench there with a genuine Emmert pattern makers vice attached to it, unfortunately sale had already been and gone but I wonder how much that vice and bench sold for.
"It is quite wrong to consider that only hand-workers are craftsmen, the only difference between the old craftsmen and the new is that the former used hand-tools and the modern craftsman uses mechanized tools." - J.Raymond Foyster, 1963

Thanks Andy. All the pictures and mentions I can find online are of the smaller sized ones. This one must have been well looked after to still have the brass soft jaw and the screw protector. The front jaw is untouched. The only faults with it are the nail holding the quick release lever (need to check if it needs a roll pin or taper pin) and it looks like somone has knocked the round bars through the front jaw a bit - I think they should be flush. If it will come to bits easily I may stick it in the press at work and try to push them back to where they should be.

By dannyr - 13 Feb 2020, 20:54
- 13 Feb 2020, 20:54 #1336248
The high, slim jaws of the Wadkin are of a type that often indicated a coach-builder (fancy pre-motor car or early Rolls etc or train carriages) where access for shaping curves was needed. Likewise gun-stocks and in engineering for filing.
These days wood sculptors often chase after them.

By dannyr - 13 Feb 2020, 21:09
- 13 Feb 2020, 21:09 #1336252
Hope you didn't burn those sausages.
Wadkin/Emmert as precursor to Record - we-e-ell - discuss.
But of course the direct precursor to Woden and Record was Parkinsons - both for woodworking and the engineering type vice - both the basic shapes and the quick release mechanism.
Your Canadian googling and forum also leads to another name - Oliver - like Parkinsons a big manufacturer of various machine tools - American/Canadian, but they also manufactured vices and had British factory/depot (Liverpool, I believe) - I passed on a couple of Oliver vices as I thought they were US made, but then found that they might have been made in Liverpool - anyone know anything about this?
Bm101 likes this

TFrench wrote:Evening chaps. I just bought this seriously cool vice on eBay - mainly because I've never seen anything like it before. I think it's a machinist/engineers vice. Absolutely beautifully made thing. The rear jaw spins when you depress the latch at the back to give all the different shaped jaws. The brass soft jaw is captive on the lower rod so it just sounds out of the way when not needed. The only marking I can find on it is HALE D 50-1. Done a fair bit of googling and can't find anything about it. Has anyone seen one before?

I have one of these, found at carboot about 10 years ago.
Mine is DOHM version, the name plate gives a London address, which was then an HMV store!
Yours has some major differences to mine, the basic layout is the same, mine has a different shaped back jaw, more triangler rather than rounded cut-outs, the release mechanism on mine is a direct acting pin, push down to release. Not the square rod system, yours appears to have.
All told a very useful small vice, limited to light work, because of "racking" in the jaws, all the support rods and screw are off-set.
All I could find out about it, was it was the smallest in a range of sizes, the largest having 6 inch jaws. Very difficult to find others, so not many could have been made, or sold.
Made/sold under a few different names, making tracing even more difficult.
Tip for use, only saw to the right hand side of the jaws. Cutting to the left, risks the blade dropping on to the vice.
Mines now sitting in store where I can't get to it, so no photos.

The type of work and period are right, but it's only a guess.
Andy