By Yojevol - 07 Jan 2019, 11:20
- 07 Jan 2019, 11:20 #1260661
Mike, I'm just wondering what any of the designs will look like from the other elevation. From the end view the legs look massively strong, but from the side they may appear as connected by only the 'thin' tabletop. Visible side rails might enhance the overall apparent strength of the structure. Can you do 3D modelling to play around with this aspect?
Brian

Edited to add - I see Custard comments on the weight of the chairs. I assume you have a crane standing by for the table, if it is that solid and big enough to seat 10 !

Yojevol wrote:Mike, I'm just wondering what any of the designs will look like from the other elevation. From the end view the legs look massively strong, but from the side they may appear as connected by only the 'thin' tabletop. Visible side rails might enhance the overall apparent strength of the structure. Can you do 3D modelling to play around with this aspect?
Brian

Originally tables were boards mounted on trestles, and were taken apart and cleared away after a meal. The solid rail thing developed after that. There will be visible rails, but they will be "flat" rather than standing on edge. They'll probably show about 50mm, and with the 40mm of the top, 90mm should be enough visual thickness I reckon. Ignore the stretcher and arched brace, which was from a previous trestle design, this is a side view: 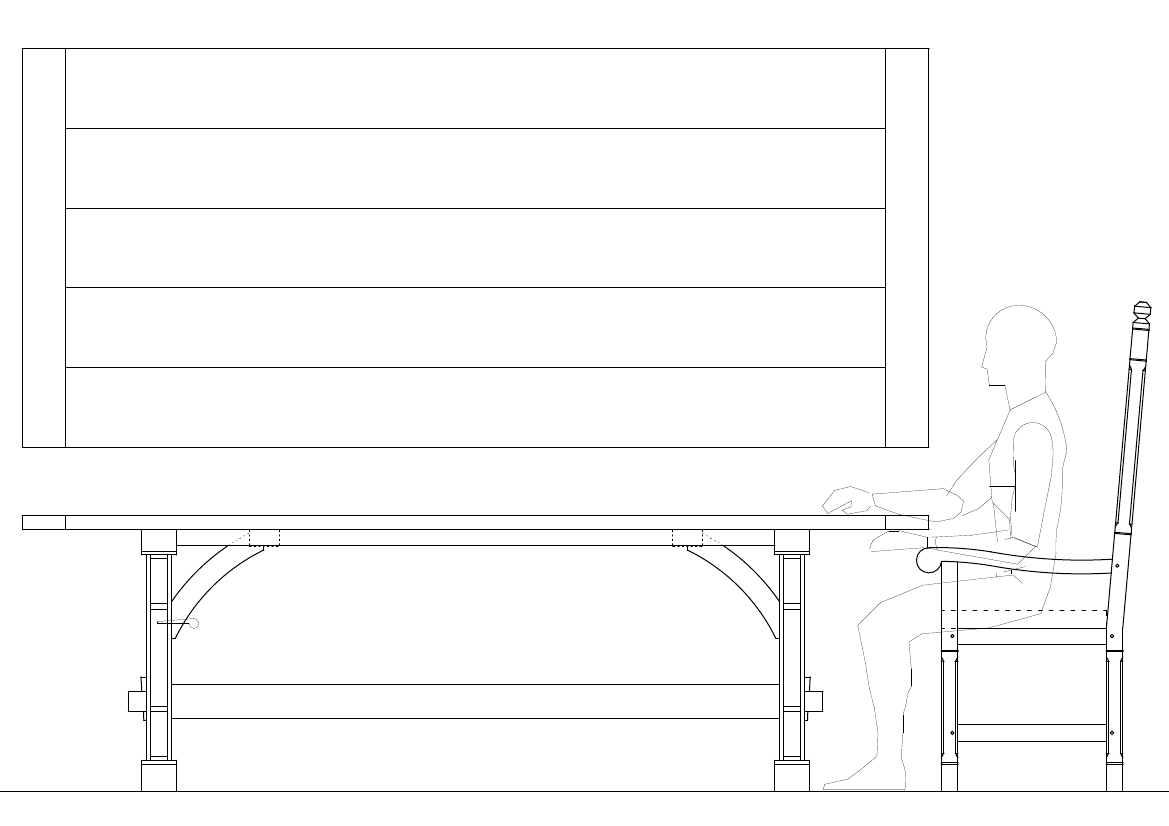 Sheffield Tony wrote:...... I assume you have a crane standing by for the table, if it is that solid and big enough to seat 10 !

The table will seat 8 ordinarily (2400 x 1050), but there will be an extension leaf for one end for christmas, when seating 10 is necessary, and it will all be knock-down. Remove the wedges and the stretcher will separate from the pedestals. The top will lift off (possibly retained with pegs, and the side rails will either be dovetailed or wedged into the pedestals. The top will be 40mm boards for the edges, but the middle boards will be 25mm ish (no shoulder on the underside of the breadboard ends)......but nonetheless, it is going to take two people to carry it in from the workshop.
Last edited by MikeG. on 07 Jan 2019, 14:01, edited 1 time in total.
Acquire skills, not tools.

custard wrote:One guideline for chairs is that they're an awful lot easier to use if they're 5kg or less, in particular children, infirm or elderly users find it more difficult to move their chair inboard of the table as the chair's weight increases. Made from Oak I think these chairs will be well over this guideline.

If your diners are all hale and hearty then of course this is a non-issue, but I thought I'd flag it in case they're not. There's a restaurant near me that has this style of chair throughout, it also attracts an older clientele. Not a good combination as the waiters are run ragged helping the diners move their chairs in and out every time they want to get up or sit back down.

One of the advantages we have at home as compared to a restaurant is that there is lots of space around the chairs. They therefore don't have to move very much, if at all, for someone to get in and out. I am deliberately looking for a heavier than normal chair, but I'll be doing my best to keep the weight down.

Another point. The table designs (apart from maybe E) look like they're solidly in the gothic revival tradition, so mainstream Arts and Crafts. But the chairs are different in that they look like the bastardised "Jacobethan" designs that were popular during the inter war period. Add in some barley twist turning and they'd be spot on!

This is a fair critique of the table, but perhaps a little unfair to the chairs. It is true that they are a cleaned-up version of an authentic 17th century chair. Vertical rather than angled backs would be a step too far for most people, but retaining the flat seat and the vertical lower leg, as well as decorating the front but not the rear legs reassures me, (at least!) that this is more Jacobean than the interwar chairs to which you refer. I'd also say that padded tapestry upholstery to the back and seat will soften the look from those early 20th century chairs.

It's not me who has to live with them so my opinion counts for nil, but I find they don't sit that well together.

I value your opinion, but don't agree with you on this.

And a final point, you can pick up large sets of very well made, 1930's "Jacobethan" Oak chairs, for an absolute song at local auctions or on Ebay. Making chairs always eat up loads more time than you expect, so that could save hundreds of hours of work. Especially as the chair seats should really slope down towards the back, if not the sitter will tend to slide out of them. That one change will add a lot of work and complicate the build quite a lot. This will be especially so in this case as you'll likely end up with cushions on them for comfort, and cushions are even slippier!

We have flat-seated chairs around the kitchen table, and the cushions simply tie on. The problem is that simple to solve. I will be making a mock up in pine sometime soon, and will experiment with upholstery-nailing the cushion onto the seat, but otherwise a simple tie resolves the matter. And no, I'm going to build them. I've never seen an inter-war piece with a finish I like (and I hate barley twist, and most other turning, which will be very hard to avoid in buying second hand). I want a particular finish, and the chair finish to match the table finish. Besides, I want to sit at a dining suite I made entirely myself.
Acquire skills, not tools.

I'm just not seeing these as interwar "Jacobethan". This is pretty similar to my design, but where they have a raised panel in the back I would have padded upholstery, and there would of course be a cushion, whether loose (tied) or fixed (nailed).
Acquire skills, not tools.

The one thing I would come back on though is the angle of the chair seat.

A flat chair seat is an instrument of totrture! As the sitter's back reclines so they're pushed out of the seat, without necessarily being consciously aware of it they'll be bracing their legs throughout the meal to compensate and keep themselves seated. That or they'll slump and spill soup down themselves!

All it takes is a three to five degree slope to the seat and the experience is transformed. I've seen chairs with flat seats that are made too low in order to compensate. This works in that the sitter no longer has to brace their legs, but they then tend to lean forward slightly so they don't get any lumbar support.

One option for a table is a Gimson/Barnsley hayrack style,

Plenty of these were made during my time at the Barnsley workshop. The chairs they were often mated with were "Clissett" style chairs that are still made today by Lawrence Neal,

I used to make this style of chair myself (I've even rushed a few although nowadays I'd recommend subbing out the rushing), there's a learning curve but it's really not that steep, and after you've made one or two they're way faster to make than any jointed chair. But more important than expediency is the aesthetics, it's interesting that both Gimson and Barnsley originally paired this style of chair with their hayrake and gothic inspired dining tables. Also the market is pretty clear on what it values, original Clissett chairs are expensive and sell really quickly, anything remotely Jacobethan (barley twist or not!) sticks around in antique shops until it grows roots even at firewood prices!

Incidentally Clissett sloped his seats with two simple mechanisms, firstly the sag of a rushed seat holds you in, and secondly he shortened the back legs a whisker to tip the whole chair ever so slightly backwards.

Okay, now I really have said my piece, good luck!

Don't go, custard. I don't take any offense at all about people not liking my design choices. I'm an architect. I get designs wrong all the time!! You only learn from conversations like this.

I had considered just chopping 5 or 10mm off the back legs, but wondered about A/ that showing in the outward lean of the lower half of the leg, and B/ slightly less stability (albeit these heavy chairs should be safe from even the most errant and enthusiastic youngster).
Acquire skills, not tools.

Can I ask what software you use to design these?

When it comes to building these, hope you do a WIP

I think you're right. I want a difference in height, but that's too much as shown.
Acquire skills, not tools.

Let me chuck another couple into the mix. They are very subtly different: 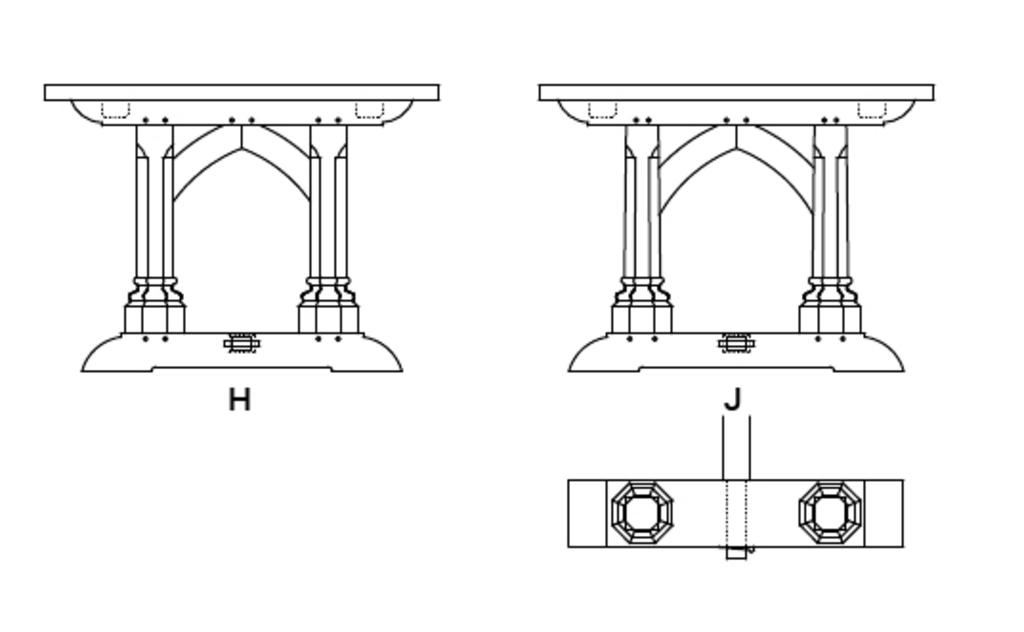 These legs are derived from the crown post in a classic English roof from the 17th century and earlier.
Acquire skills, not tools.